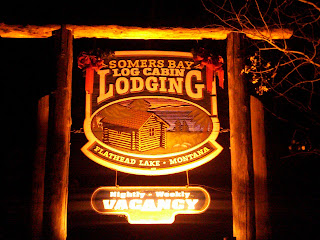 We pulled into St. Regis and decided it was time to eat dinner, so we went into BLANK and I had teriyaki chicken dinner. I’d had it the last time we were passing through, so I knew I didn’t even need to open my menu. It was delicious and so was the baked potatoe soup, mmmmm, mmmmmmmmm, I highly recommend stopping in and treating yourself to these tasty items. They serve really nice portions and even though the dining room is rather small, it is a comfortable atmosphere. However, the last time we had stopped in they had just gotten done having tricycle races, yes tricycle races, and the bar side of this establishment was overflowing with tricycle riding revelers. Who knows if it got rowdy as the night wore on, but it seemed to be a happy crowd while we were there.

The weather held out for us as we made our way from St. Regis toward Kalispell. Within a short time we were getting close enough to our destination, (Kalispell), that I began searching for a place to stay. I grabbed the GPS and started searching. After several calls to motels that were either to high priced or to off the beaten trail, I foundSomer’s Bay Log Cabins. I almost didn’t call. Just the name screamed “I’m gonna be expensive,” but we were pleasantly surprised with the price, not to mention the gentleman on the other end of the line was very friendly. I had explained that we were hauling some trailers behind our pickup, that we would be delivering to Gardner RV in Kalispell, the following morning.

“What kind of trailers?” he asked.

“We have a stack of five utility trailers, so we need extra room to park, will you have a parking space for us?” I asked.

“Five trailers, thats against the law, you can’t haul five trailers in a line behind you.” He was in shock.

“No, no, it’s just a stack of trailers, one on top of the other. A stack.” I tried to explain.

Evidentally the picture he had in his head of us pulling five trailers like a train was hard for him to shake. Finally he understood and was outside waiting for us when we arrived at his place. It was rather funny. I think he was thinking we were crazy people trying to get away with pulling a trailer train down the Montana highway.

The cabins were adorable. Each one had  a front porch. There was plenty of room between each one that a person would not feel like their space was being invaded. The road that led to each cabin was paved and there was plenty of green grass to contrast with the light wood logs of each cabin.